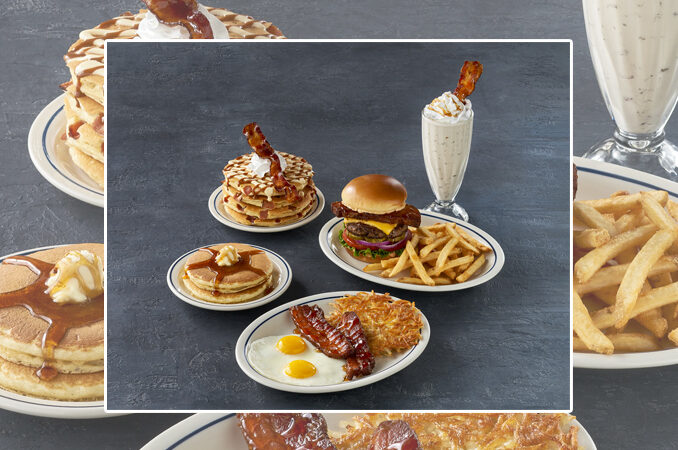 IHOP is making a sizzling side dish the main entrée.

Bacon is getting its own menu at the pancake house with a thick-cut, steakhouse-style variety of the breakfast staple slathered in maple glaze, IHOP declared Tuesday.

The “Bacon Obsession” menu features bacon the chain portrays as “five times thicker” than its regular bacon. And keeping in mind that the breakfast meat can be ordered solo, IHOP additionally has it featured on new menu items like the Steakhouse Premium Bacon Burger and a Maple Bacon Milkshake.

The breakfast staple will be served the entire day through June 13. IHOP’s menu will likewise include Candied Bacon Pancakes that are stacked with hickory-smoked bacon bits; a Steakhouse BLT; Bacon Lovers Combo, which are two Candied Bacon Pancakes with chunks of the thick-cut breakfast meat; and the Oreo ‘N Bacon Waffle Sundae among different things.

“As guests begin to return to restaurants, we know they’re looking for broadly appealing and familiar comfort foods, as well as new ways to enjoy classic favorites, and bacon is the perfect option that fits both needs,” Jay Johns, President at IHOP, said in a statement.

IHOP teased the release of its “premium” thick-cut bacon via social media, leading some food pundits to address the publicity.

“I would argue that bigger bacon is the same as bacon and not bigger than bacon,” one user remarked on Twitter at the chain’s ad for “bigger bacon.”

Another added, “The only thing better than bacon would maybe be a nice steak.”