Thursday, 29 September 2022
You are here: Home Here is what’s new and how to get the major update from Apple for your iPhone 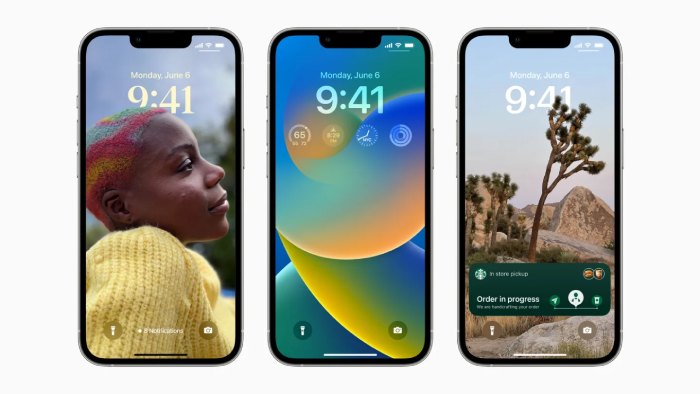 On Monday, Apple launched the important iOS 16 software update for iPhones. Anyone with an iPhone 8 or newer may access it, and it offers a tonne of additional features.

Every year, Apple makes significant software updates to keep the iPhone modern. Additionally, it is simultaneously accessible for all supported devices, unlike Google’s Android. The update for this year is significant, adding a brand-new lock screen that can be personalised with widgets and typefaces that were previously restricted to the home screen.

There are many changes, but these are some of the most important ones for you to be aware of.

Within 15 minutes of sending a message in iMessage, users can edit or unsend it. The updated or deleted message will be visible to the other user.

Users can set emails to send later using the built-in Mail app for iPhones. It also contains a new undo send option and a new, improved search capability that, according to Apple, provides “more accurate and complete results.”

Finally, the Tapback responses from iMessage users, including smiles, hearts, and more, will be visible inside text chains for Android users. You won’t receive the responses as individual mails, therefore. For iPhone users who text with Android users, it should be a significant improvement.

With Smarter Dictation, you can speak texts and have commas, periods, question marks, and even emoji inserted automatically. Just say “happy face emoji” to add one.

This enables users to instantly disable all services and apps that share information with other parties, such as family members, such as location. According to Apple, Safety Check was developed in collaboration with women’s organisations and will make it simpler for users to maintain their privacy, preserve their personal information, and stay safe when leaving violent relationships.

When your phone is locked, notifications now show up at the bottom of the screen, where you can simply hide them to keep them out of the way. By tapping and holding the lock screen, you may also alter your Focus mode to quiet some messages when you’re asleep, at work, or on vacation.

Users will be able to customise their lock screen with smaller widgets that provide real-time info.

Apple Maps users may now add additional stops to a route, allowing you to include a pit break at the coffee shop on your way to work. Although it is a function that is already included in Google Maps, iPhone users will like it. You can reload your card, view the cost of your trip, and more with the new Transit card function in Maps.

Users can now input their drugs into Apple’s Health app, which will alert them when it’s time to take their medications. The iPhone health app will now allow Apple Watch owners to track their heart rate and sleep.

Apple translates text in user-taken images or videos using artificial intelligence. A topic from a photo, like a person, can also be ripped out and added as a sticker in pictures or other programmes. Later updates to iOS 16 will allow it to automatically share photos with anyone it recognises in them, including friends and family.

This function enables users to settle Apple Pay purchases over the course of four payments spaced six weeks apart. It will also be simpler to send digital cards or house keys via texting with Apple Wallet in iOS 16.

Apple improved the Home app’s display of features like the several cameras in and around your home. The business declared that Matter, an open standard for smart home hardware including locks, lighting, and blinds, is something else it supports.

You can ask Siri to end a FaceTime or phone call for you. Simply say, “Hey Siri, hang up,” to end the call.

To use Apple’s premium Apple Fitness+ subscription, which costs $9.99 per month, you do not need an Apple Watch. Numerous exercise and meditation videos are available, including ones for cycling lessons, HIIT, and other activities.

With this function, you may transfer a FaceTime call from your iPhone to a different device—like a Mac or an iPad—without having to end it. Additionally, it will swap any Bluetooth headphones you have paired with your iPhone over to the new one. However, the most recent updates for Mac and iPad are expected later this fall.

Actual Activities A minor iOS 16 update that will be released later this year will include this functionality, which allows you to display widgets on your home screen. You’ll be able to check the score for a team you follow or see exactly when your food order will arrive without having to unlock your phone.