Monday, 23 May 2022
You are here: Home Google launches its first smartwatch, as well as a new budget phone and more 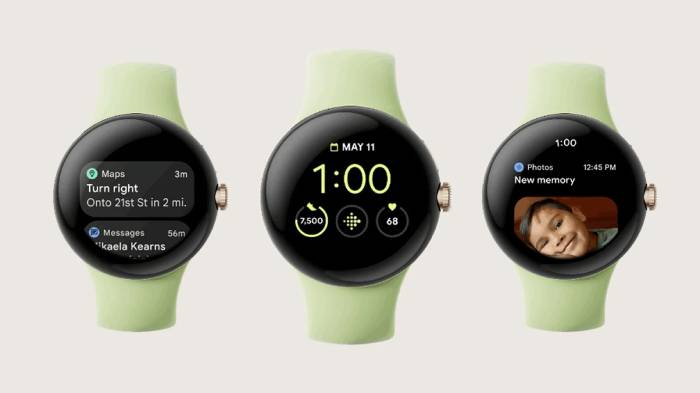 On Wednesday, Google introduced several new products at its I/O developer conference, including the Pixel Watch, a new affordable Pixel 6a phone, and headphones. It also teased at a new tablet and teased the Pixel 7 phone, which will be released this fall.

Hardware isn’t a big part of Google’s business right now, but that’s changing as the company rolls out new devices. Last quarter, Google made $61.24 billion in advertising revenue, with $8.16 billion in “other revenue,” which includes hardware sales, apps, and non-advertising revenue. However, this is up from $6.67 billion in the previous quarter, and despite supply challenges, CEO Sundar Pichai stated the Pixel smartphone set an all-time sales record.

This is what Google said.

The Google Pixel Watch has similar functionality to the Apple Watch and a sophisticated and sleek design that may appeal to buyers who prefer Android to the iPhone, which it does not support.

It will incorporate Fitbit’s technology, allowing it to benefit from the fitness startup’s years of research and development. Users will be able to track their sleep, heart rate, and workouts using Fitbit technology.

The watch is powered by Google’s Wear OS software, which allows users to read messages and download music. Users may also use Google Maps to find directions or connect it to their smart home gadgets to modify the temperature of their thermostat or make sure the lights are turned off.

Apart from telling reporters over the phone that it will be a premium product, the business did not disclose a pricing. It will be released in the fall.

Other firms, such as LG, Samsung, Huawei, and Fossil, had already used Google’s software to create watches.

This summer, Google will introduce its newest affordable Pixel phone. The Pixel 6a will have a similar look to the Pixel 6, however it will be somewhat smaller and will cost $449.

The Extreme Battery Saver mode, which Google claims is a first for Pixel phones, promises an all-day battery that can last up to 72 hours.

It also uses Google Tensor, ensuring that the affordable phone has the same processing capability as the Pixel 6 and Pixel 6 Pro.

The Pixel 6a will be available in three colours: chalk, charcoal, and sage, and will receive five years of security upgrades.

There will be a Pixel 7, Pixel 7 Pro, and a new Pixel tablet

The new Pixel 7 and Pixel 7 Pro flagship phones were teased by Google. They’ll launch with Android 13 and the next generation of the Google Tensor chip. The Pixel 6 was intended at the middle market with a $599 starting price, while the Pixel 6 Pro was priced at $899.

The Pixel 6 has become the most popular Pixel model ever. The 6 sold more units in its first six months than the Pixel 4 and Pixel 5 combined in their first six months. The business aims to keep up the momentum, which might help Google overtake other Android manufacturers like Samsung.

Google also teased at a future Android tablet that will debut in 2023 and use a Tensor processor. The business did not offer pricing information, but stated that it will be a high-end product.

Since the Pixel Slate in 2018, the firm hasn’t released a tablet. Some users, however, claimed that the tablet felt more like a laptop than a tablet. Google had struggled with adopting Android as a tablet operating system prior to its release. In 2019, Google’s hardware chief Rick Osterloh stated that the firm’s hardware team would focus on manufacturing laptops in the future, but that the business was “committed for the long-run on working with our partners on tablets for all segments of the market.”

The Buds Pro now include active noise cancellation, which helps them filter out background noise and puts them in direct competition with Apple’s AirPods Pro. For crisper calls, the earbuds contain beamforming mics, a voice accelerometer, and wind-blocking mesh covers. They’ll also enable spatial audio, which makes music appear to come from all directions. Apple’s AirPods also have this capability.

The Pixel Buds, which come in four hues (coral, lemongrass, fog, and charcoal),