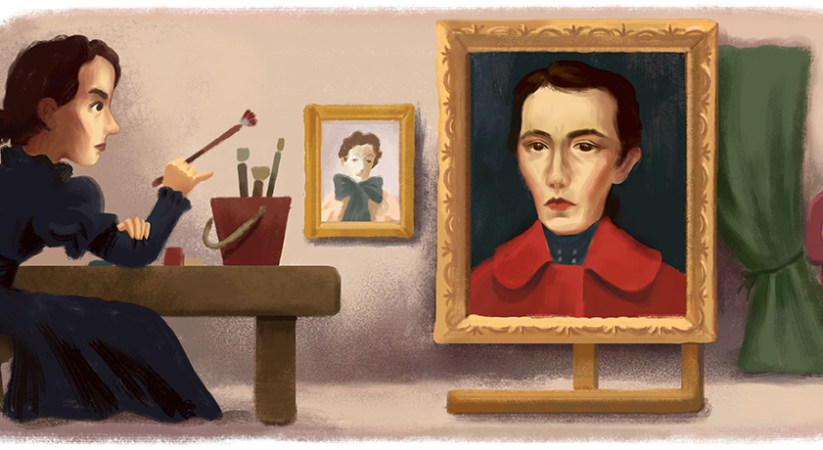 The present Doodle praises the 155th birthday of Portuguese artist Aurélia de Souza, one of only a handful few ladies whose work was shown in exhibitions close by Portugal’s great 19th century painters. Injected with strokes of realist and impressionist influences, de Souza’s naturalist paintings filled in as windows into day by day Portuguese life through scenes of her excursions and her undisputed top choice type: self-and family pictures.

On this day in 1866, Maria Aurélia de Souza was born to Portuguese outsiders in Valparaíso, Chile. Her family got back to their country in the wake of procuring a ranch along the Douro stream close to Porto, Portugal. It was on these ideal banks that de Souza started to paint and draw at 16 years old. After just three years, she painted her first portrait—an art that turned into her hallmark.

In 1893, de Souza further refined her ability in the Portuguese custom as an understudy of the Porto Academy of Fine Arts. De Souza moved to Paris in 1899, where she extended her range as an understudy of a few French masters. Following one year in her new home, she caught herself dressed wearing a red-coat in the oil painting “Self-Portrait,” a work generally viewed as her generally renowned. She kept on attracting impact from the international arts the years that followed, traveling Europe prior to getting back to Portugal in 1902.

De Souza’s paintings were routinely included at her place of graduation, only one of the numerous prestigious Portuguese galleries that championed her work. Notwithstanding her deep rooted fill in as a painter, de Souza likewise showed for Portuguese magazines and the 1913 short story named “Perfis Suaves” (“Smooth Profiles”).