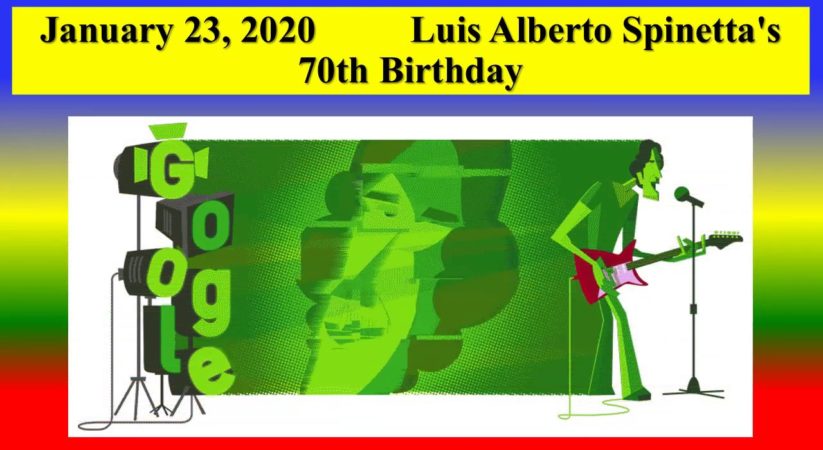 The present Doodle praises the 70th birthday celebration of Argentine artist, writer, guitarist, and artist Luis Alberto Spinetta. Otherwise called El Flaco (“Skinny”), he is regularly viewed as the dad of Spanish-language awesome and a Latin American music symbol. The Doodle craftsmanship includes the shading green as a reverence to Spinetta’s notable and sporadically formed collection front of Artaud, just as his celebrated red and white guitar.

Conceived on this day in Buenos Aires in 1950, Spinetta figured out how to play guitar and sing at a youthful age. He kept on building up his melodic abilities, and at age 17 Spinetta shaped one of the most persuasive musical gangs in Argentine history, named Almendra, with two of his previous secondary school schoolmates. Almendra’s self-titled presentation studio collection upset the class as the primary band to consolidate Spanish-language verses with dynamic stone.

During the 1970s and 80s, Spinetta framed and drove a few significant groups that motivated the global “Rock en Español” development, including Pescado Rabioso, Invisible, and Spinetta Jade. Notwithstanding these gathering ventures, he discharged more than twenty collections as an independent craftsman. In 2016, his most recent record Los Amigo won perhaps the most elevated respect in Argentinian music, the Gold Gardel Album of the Year grant.

His music struck a significant harmony all through the world and keeps on affecting audience members right up ’til today. For example, in April 2019 it motivated University of Buenos Aires informatics engineer Alex Ingberg to make a man-made brainpower program to create tune verses in Spinetta’s style. Also, in 2014, to pay tribute to Spinetta’s birthday, Argentina moved Día Nacional del Músico (National Musician’s Day) from November to January 23rd.