Saturday, 13 August 2022
You are here: Home ‘Encanto’ Disney Animation’s 60th movie, and is regarded as one of the best among reviewers 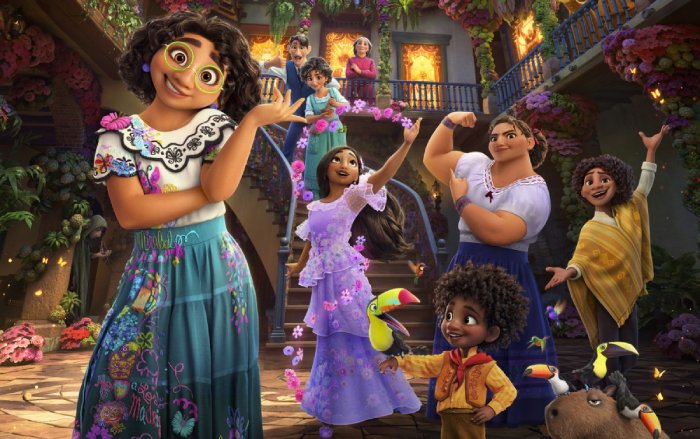 Since 1937, Walt Disney Animation Studios has been producing attractive animated feature films for the general public. Critics claim its 60th feature, “Encanto,” is one of the best.

The Madrigals, a family who live concealed in the Colombian mountains in a spot called the Encanto, are the focus of the film, which will be released in theatres ahead of Thanksgiving.

After Abuela Alma was forced to abandon her home with her young triplets, the family arrived in the Encanto. She was granted a miracle, which gave her a magnificent home and bestowed one-of-a-kind gifts on everyone of her children – except Mirabel.

When the Encanto’s magic is threatened, causing the house’s foundations to break and the Madrigals’ powers to vanish, Mirabel is the one who steps forward to discover out how to stop it.

The film’s animation style, diversity, and “spellbinding” tunes have all been acclaimed by critics. On Rotten Tomatoes, it presently has a 93 percent “Fresh” rating based on 82 reviews.

In his Forbes review of the film, Scott Mendelson noted, “Disney’s 60th animated feature is among their best.”

“Even with some grim undertones and periodically downbeat thematic elements, it is a generally joyful and thrillingly colorful fantasy that’ll once again make us realize how much visual wonder we take for granted in modern animation,” he wrote.

Before its premiere on Wednesday, here’s what some critics had to say about Disney’s “Encanto”:

From clothes stitching to lifelike hair, Disney’s two animation studios have long been renowned for their groundbreaking abilities in creating delicate details. This tradition is carried on in “Encanto.”

“The computer animation, some of the best from any major studio in the last several years, presents a dazzling confabulation of hues and a meticulous weaving of precious details — like the embroidery on skirts, the golden-brown crust of a cheese arepa and the selection of native Colombian flora,” said Maya Phillips, a New York Times writer.

“Encanto” displays a “robust engagement with, and respect for, Latino culture,” according to Phillips, who points out that the Madrigal family members’ complexion tones range from light to dark, and their hair textures range from straight to kinky-curly. It’s a broad spectrum that reflects the diversity of the Latino community.

“From ‘Snow White And The Seven Dwarfs’ to ‘Raya And The Last Dragon,’ Walt Disney Animation Studios has spent the past eight decades perfecting its signature riff on the classic hero’s journey,” wrote Caroline Siede in her review of the film for AV Club. “So it’s a bold move that for its 60th feature, ‘Encanto,’ the studio turns so many of those classic tropes on their head.”

Mirabel Madrigal, unlike many of Disney’s cartoon characters, has two surviving parents and is surrounded by a large extended family, according to Siede.

“How fun to see a Disney heroine with cousins,” she wrote.

Mirabel’s lack of magical skills, she pointed out, distinguishes her from other Disney heroines. Many of Disney’s heroes have unique abilities or endowments that set them apart from other characters.

“That makes Mirabel a sort of reverse Elsa, if you will, and instead of setting off on an adventure to find herself, her quest leads inward into her own family history and the secrets buried inside it,” Siede wrote. “Therein lies ‘Encanto’s’ biggest innovation: It’s a Disney adventure that never leaves the house.”

“The songs, by Lin-Manuel Miranda, are syncopatedly infectious, word-weavingly clever, and unabashedly romantic; they keep the film bopping,” noted Owen Gleiberman in his Variety review.

Miranda has worked with Disney on a number of projects recently, including “Moana” and the impending live-action rendition of “The Little Mermaid” from the company.

“And the whole picture is intricate and accomplished enough to make the era when your average Disney house animated feature was several tiers below that of Pixar seem like ancient history,” Gleiberman wrote. “Yet for all the dazzle on display, none of it would mean much if ‘Encanto’ didn’t present its heroine’s moving journey in a way that kept surprising you.”

“That’s the key to enthralling animation — it stays one jubilant beat ahead of the audience,” he stated.

Many critics praised the film’s voice cast, including Mendelson. He singled out John Leguizamo, who plays an uncle whose ability to predict the future puts him at odds with his family, for his “equal parts comedy and misery” performance.

“Encanto’ uses the commercial freedom of being a big-scale Disney Animation release to both exist as a triumph of demographic representation and to not use that representational milestone as an alibi to tell an otherwise generic story,” Mendelson stated.

“Mirabel joins the ranks among one of the more realised Disney heroines, partially because she’s not required to hit ‘bad-ass female warrior who isn’t your everyday princess’ notes,” he said. “If anything, the awkward misfit is who would usually be a supporting character in a conventional animated epic, and that adds to her universal relatability.”