Wednesday, 7 December 2022
You are here: Home Destiny 2 is getting Halo Guns for Bungie’s 30th Anniversary 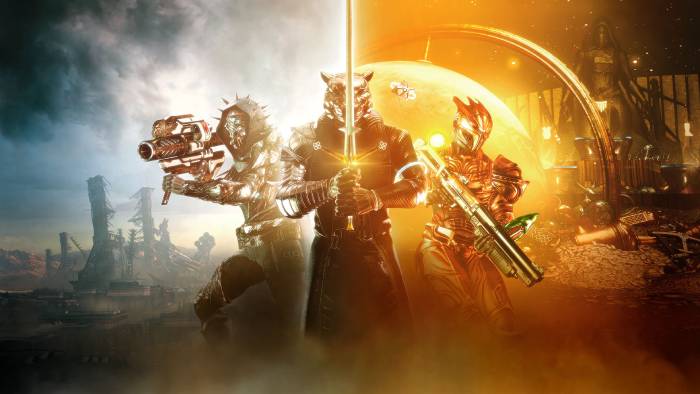 Rumors of a crossover have been swirling for quite some time. Bungie is celebrating its third anniversary this year with a Destiny 2 event “that pays honour to the adventures we’ve shared.” Analytical fans were in a tizzy over whether or not character silhouettes indicated the inclusion of Halo-inspired guns, such as the classic battle rifle, in early promotional screenshots. Plus, I’m not sure if you’ve heard, but there’s a new Halo game out this week that oozes original-trilogy vibes (back when Bungie was in charge of the series).

The stars aligned a little too beautifully for anything less than a massive crossover on the size of a Marvel Cinematic Universe movie’s end-credits stinger.

Four weapons that are definitely stolen from Halo can be seen among the chaos, as documented on Bungie’s website:

All of these items, according to Bungie, are part of the “Dares of Eternity” event, which is open to all players. Other goodies, such as the return of the fan-favorite Gjallarhorn rocket launcher, are exclusive to Destiny 2 30th Anniversary Park purchasers.

Following the release of Halo 3 in 2007, Bungie, which was originally entirely owned by Microsoft, went independent. The studio left the Halo rights with Microsoft when it went indie, yet went on to develop and distribute two more Halo games for Xbox: Halo 3: ODST and Halo: Reach. Following the release of Reach, Microsoft formed 343 Industries, a new studio dedicated only to keeping the Halo machine running. In the years following, 343 has produced three full games—Halo 4, Halo 5: Guardians, and Halo Infinite—along with a collection containing nearly every Halo game prior to Halo 5.

Xbox chief Phil Spencer told Axios Gaming earlier this year that he believes Microsoft could have kept Bungie under his leadership, but that he understands why the venerable studio would want to go its own way.

“At the time, they had big ambitions. They had sold their business for a certain amount of money. They saw what Halo turned into,” Spencer said. “And it’s like, ‘OK, Microsoft benefited more than Bungie did from the success of Halo.’ There’s no other story that can be written there.”

Destiny 2 and all of its expansions have been included in Game Pass, Microsoft’s Netflix-for-games subscription programme, for the past year and a half, drastically decreasing the barrier to entry for its 18 million customers. Bungie will remove Destiny 2’s expansions from the Game Pass library this week, as the hype cycle for February’s release of The Witch Queen expansion heats up.