Saturday, 25 June 2022
You are here: Home Biden and Putin agrees ‘in Principle’ to Ukraine summit 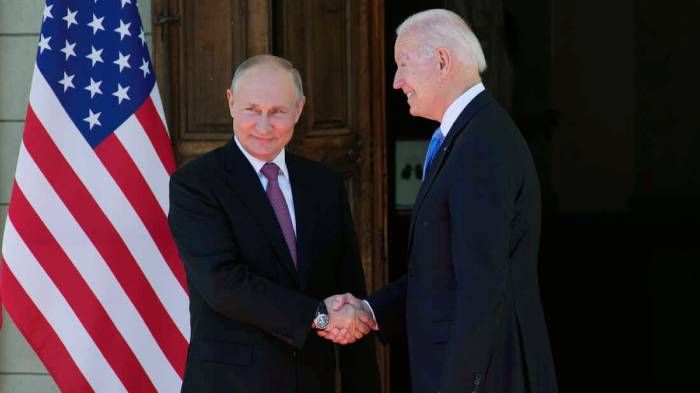 Presidents Joe Biden of the United States and Vladimir Putin of Russia have agreed in principle to meet over Ukraine, according to French President Emmanuel Macron, giving a way out of one of Europe’s most perilous crises in decades.

In a statement, the office of French President Emmanuel Macron said he had proposed a summit on “security and strategic stability in Europe” to both presidents. Biden approved the meeting “in principle,” according to the White House, but only “if an invasion hasn’t happened.”

Jen Psaki, the White House press secretary, stated, “We are always ready for diplomacy.” “We are also ready to impose swift and severe consequences should Russia instead choose war.”

The content of the summit will be hashed out by US Secretary of State Antony Blinken and Russian Foreign Minister Sergei Lavrov during their meeting on February 24, according to Macron’s office and the White House. It was also unclear what, if any, role Ukraine will play in the conference.

The summit is “completely notional,” according to a Biden administration official, because the schedule and format have yet to be finalised.

Former US ambassador to Russia Michael McFaul, though, is sceptical that the summit will take place.

“But if Biden and Putin did meet, they should invite (Zelenskiy) to join,” he wrote on Twitter.

The announcement of Macron’s proposal comes after a week of rising tensions fueled by Russia’s military buildup around Ukraine’s borders. Since late last year, Russian soldiers have been massing around its neighbour, which Western countries believe is a prelude to an invasion that might occur at any time.

The Belarusian defence ministry announced that Russia would extend military drills in Belarus that were set to expire on Sunday, further fraying nerves.

Maxar, a satellite photography business located in the United States, reported many additional deployments of Russian military units in forests, farms, and industrial regions as close as 15 kilometres (9 miles) from Ukraine’s border.

Blinken stated on Sunday that the extension of the drills in Belarus, which borders Ukraine to the north, has increased his fears that Russia is about to launch an attack.

“Until the tanks are actually rolling, and the planes are flying, we will use every opportunity and every minute we have to see if diplomacy can still dissuade President Putin from carrying, this forward” he said.

The US expressed alarm in a letter to UN human rights chief Michelle Bachelet, seen by Reuters on Sunday, that “further Russian invasion of Ukraine may create a human rights catastrophe.”

“Specifically, we have credible information that indicates Russian forces are creating lists of identified Ukrainians to be killed or sent to camps following a military occupation,” wrote Bathsheba Nell Crocker, the US Ambassador to the United Nations in Geneva.

She also stated that Washington has solid intelligence that Russian military would likely use deadly means to disperse protesters or oppose “peaceful exercises of perceived resistance from civilian populations.”

Since Thursday, sporadic shelling has increased across the line separating Ukrainian government forces and pro-Russian separatists in eastern Ukraine. A blast was reported in the centre of the separatist-held city of Donetsk on Monday, adding to the sounds of battle. The reason for the death was unknown.

According to Russia’s RIA news agency, two civilians were killed in shelling by Kyiv government forces on Monday.

Pro-Russian militants have been accused of shelling their own compatriots in the breakaway territory in order to blame the strikes on Ukrainian government forces, according to Kyiv.

In the event of an invasion, Western countries are preparing broad sanctions against Russian corporations and individuals, according to reports.

Russian enterprises’ access to the dollar and the pound, for example, could be restricted, according to British Prime Minister Boris Johnson.

According to German network ARD, European Commission President Ursula von der Leyen, Russia “would in principle be cut off from the international financial markets” and be cut off from major European exports.

Dmytro Kuleba, Ukraine’s foreign minister, said it was past time for the West to put at least some of the penalties in place.

The Biden administration has declined to do so, claiming that if they were utilised too quickly, their deterrent effect would be gone.