Monday, 28 November 2022
You are here: Home Arizona Cardinals star Kyler Murray agrees to 5-year, $230.5M extension, making him one of the richest players in the NFL 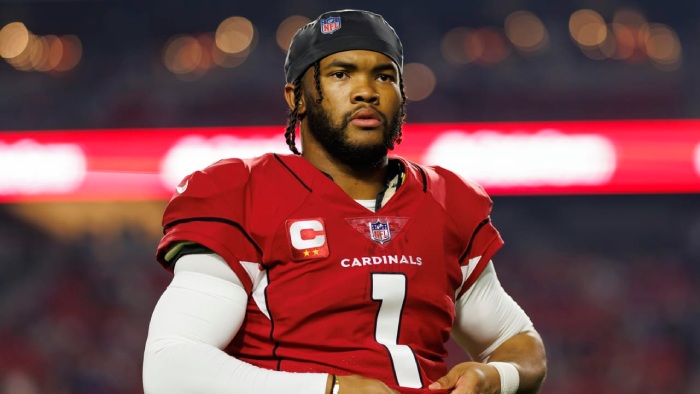 According to a source who spoke to ESPN’s Adam Schefter, Arizona Cardinals star Kyler Murray has agreed to a five-year agreement worth $230.5 million, making him one of the highest-paid quarterbacks in the NFL.

According to the source, the contract, which extends through the 2028 season, includes $160 million in guaranteed pay for injuries. Upon signing the contract, Murray will receive a fully guaranteed $105 million salary, the source says.

Watson’s $230 million fully guaranteed contract with the Browns is the only one in NFL history to have more guaranteed money than Murray’s.

Murray’s five-year agreement was formally announced by the Cardinals on Thursday, though no financial details were provided. Several of Murray’s teammates, including star safety Budda Baker and recently acquired receiver Marquise “Hollywood” Brown, praised the quarterback on Twitter.

After months of continued negotiations, the deal was finally finalised Thursday morning by Murray’s agent, Erik Burkhardt, and Cardinals general manager Steve Keim, according to Schefter.

After the Cardinals exercised their fifth-year option on Murray’s rookie deal in April, the 24-year-old player was already committed to the team through the 2023 campaign.

But earlier this year, after the Pro Bowl, Murray deleted all but two of his Instagram posts—one of him at Oklahoma in 2018 and one from the Pro Bowl—making the long-term status of the 2018 Heisman Trophy winner in Arizona uncertain.

Keim stated earlier this year that there was “zero chance” Murray would be traded and suggested a long-term agreement might be reached during the summer after the team had a chance to “take a deep breath and sort of refocus” following free agency and this year’s NFL draught. This timeline for negotiations was similar to that of third-year quarterbacks Patrick Mahomes and Josh Allen of the Buffalo Bills, who both signed lucrative contracts.

The Cardinals selected Murray first overall in the 2019 NFL Draft, and during the past three seasons, he has emerged as one of the league’s top young quarterbacks. Each season, he improved the Cardinals’ record while taking them from five wins in 2019 to eight in 2020 and 11 in 2021.

With at least 70 passing touchdowns, 20 rushing touchdowns, 3,500 passing yards, 400 rushing yards, and 17 games with a completion rate of at least 70% in his first three seasons, Murray is the first player in NFL history to achieve these feats. With a 66.86 percent total completion rate, he has the highest mark among players in his first three seasons.

Murray was also selected for the Pro Bowl in each of the previous two seasons and was named the Offensive Rookie of the Year in 2019.

After dropping six of its last nine games, including back-to-back win-and-they’re-in games to finish the season, Arizona missed the playoffs in 2020. Injured for the majority of the second half of 2020, Murray spent the summer angry and regretting self-inflicted mistakes that prevented the Cardinals from making the playoffs.

The Cardinals, though, seemed to have resolved their problems from the end of 2020 in 2021. They got off to a 7-0 start, and Murray was a candidate for MVP. After suffering an ankle injury that caused him to miss three games, Arizona finished the regular season with a record of 4-6 and lost to the Los Angeles Rams in the NFC wild-card round.