Wednesday, 8 December 2021
You are here: Home Apple Watch Series 7 rapid charging is available for the first time on Belkin’s new $150 3-in-1 charger 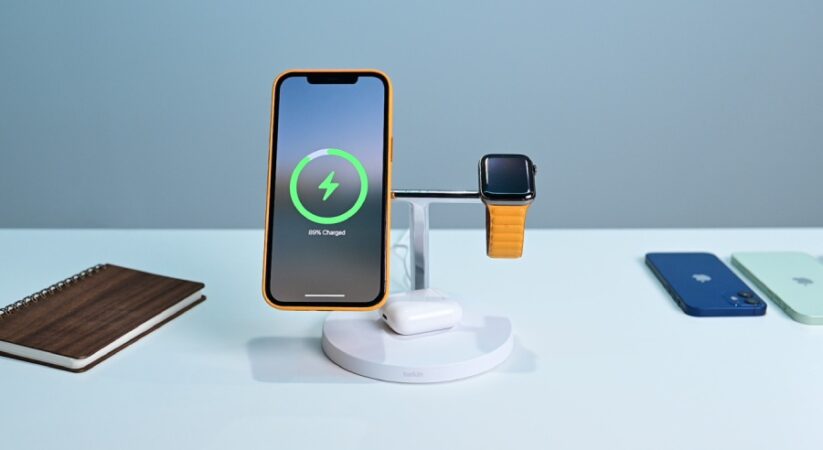 The $149.95 BoostCharge Pro 3-in-1 Wireless Charging Pad with MagSafe is the largest of the two, and it follows in the footsteps of last year’s 3-in-1 Belkin charger. Belkin has scrapped the weird sculptural appearance of the previous edition in favour of a more normal-looking flat rectangular pad that will probably sit better on a nightstand, in addition to incorporating Series 7 fast charging.

The new charger seeks to provide the ideal Apple charging experience: full-speed 15W MagSafe charging for iPhones, Series 7 fast charging for Apple Watches, and a normal Qi charger for AirPods. Of course, like with all of Belkin’s combination chargers, the $150 price tag is far higher than the cost of individual MagSafe, fast-charging Series 7 Apple Watch, and Qi chargers, indicating that you’re paying a premium for style and convenience. You’re also getting a 40W power adaptor for that amount, so you’re getting a one-stop solution for your money.

The BoostCharge Pro Portable Fast Charger for Apple Watch, which is a pop-up Apple Watch charging stand that costs $59.95, is the other new charger here. Belkin’s single charger isn’t a battery pack-style device for recharging an Apple Watch while you’re out and about, despite the word “portable” in the name. Even more perplexing, the $60 price tag excludes a power adapter: while the stand includes an integrated USB-C connection, you’ll need to supply your own 20W wall adapter to utilise it.

The end result is a larger, heavier version of Apple’s fast-charging cable, which comes standard with every Apple Watch Series 7 — but Belkin’s version costs more than twice as much as the standalone cable, which costs $29 on its own.

Looking at things more broadly, the new Belkin fast chargers demonstrate — once again — Apple’s MFi program’s intentional limits. Belkin’s new chargers are now the only third-party fast chargers available, and if last year’s glacial MagSafe rollout is any indication, it will be some time before other businesses are able to gain Apple’s clearance (and parts) to produce alternative options.

Both the $59.95 BoostCharge Pro Portable Fast Charger for Apple Watch and the $149.95 BoostCharge Pro 3-in-1 Wireless Charging Pad with MagSafe are available to order today from Belkin and Apple’s respective websites in the United States, Japan, Hong Kong, and China, with more countries to follow in the coming months.