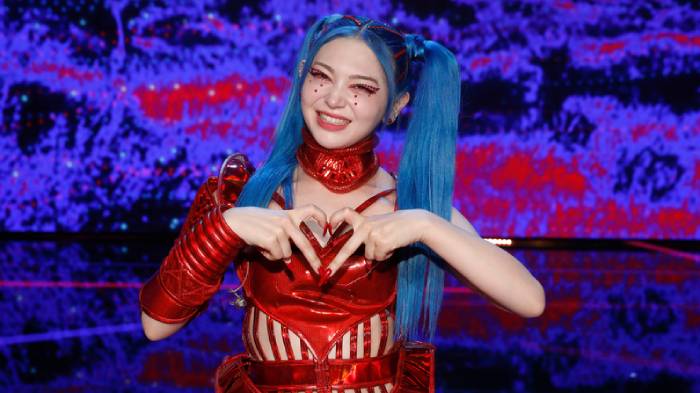 AleXa, a K-pop artist, has won the US version of Eurovision for the first time.

With the electro-pop song Wonderland, the 25-year-old, who was representing her native state of Oklahoma, won.

She won over nine other performers, including four-time Grammy winner Michael Bolton.

When the results were disclosed, the singer, who has a flourishing career in her second country of Korea, stated “it felt like my brain exploded.”

She told Billboard magazine, “My mother was holding onto my arm and she was crying and shaking and so I cried with her.”

AleXa wore a number of spectacular ensembles throughout the competition to perform her Alice-in-Wonderland-themed smash, which featured colourful stage productions and exquisite choreography, including a heart-stopping backwards tumble from the top of a staircase.

“Wonderland is a very complex staging routine. If we had a scale from one to 10, this is definitely an 8.5” she said before her last performance.

“I love stunts. I love doing falling things. I’m not afraid of heights.”

The US version of Eurovision, hosted by Kelly Clarkson and rap legend Snoop Dogg, premiered in March.

During eight weeks of qualifying rounds, contestants from 50 states competed against each other. Before Monday’s grand final, several established stars, including Macy Gray and Sisqo, were voted out.

The voting process was similar to that of Eurovision, with juries awarding points to individual acts before a public vote was tallied.

Allen Stone of Washington State won the jury round with his song A Little Bit of Both, which received 105 points.

However, AleXa, who had promoted Wonderland with a viral TikTok challenge, stormed to victory in the public vote, rising from fifth to first place with 710 points.

Some viewers had to be taught about Korea’s aesthetic-driven blend of high-octane pop and maximalist production along the road.

In a video promoting her performance, she noted, “There are so many things that make K-pop K-pop.” “The hair, the make-up, the outfit, the lighting, the staging, the choreography,” she says.

She earlier told her local newspaper, “Country music is definitely something Oklahoma is well known for, but there are bands like The All-American Rejects and Hanson as well that came from Oklahoma.” “It’s so much more than just country music, and I’m very proud to represent that.”

The Korean-American singer, whose true name is Alexandra Christine Schneiderman, has won a TV talent show before.

She began her music career in 2017 after winning the Korean show Rising Legends, which included a trip to Seoul and the opportunity to audition for Cube Entertainment.

She later debuted on the ZB Label with the single Bomb, and in early 2020, she released her first EP, Do or Die.

She said her objectives were focused on music while addressing backstage at the American Music Awards.

“I would, more than anything, love a tour, if that would ever be something possible.”

She will perform at the Billboard Music Awards this weekend as part of her award, and her song will be broadcast on iHeart radio stations across the country.