Wednesday, 1 February 2023
You are here: Home After the Presidents Cup golf matches, the United States builds 4-1 lead over the Internationals 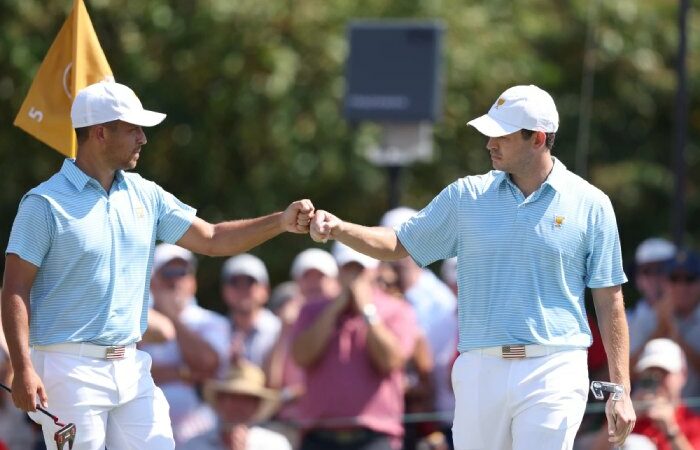 The plan was for two of the most reliable American teams to lead the Presidents Cup on Thursday, and the outcome was expected.

In the first game, Xander Schauffele and Patrick Cantlay easily defeated Adam Scott and Hideki Matsuyama. In a 6-and-5 triumph, they didn’t make a bogey, bringing their Presidents Cup and Ryder Cup foursomes record to 5-0.

Since they were 14 years old, Jordan Spieth and Justin Thomas have been closest friends. They held off Sungjae Im and Corey Conners, 2 and 1, thanks to clutch shots that made up for their mistakes.

On a scorching day at Quail Hollow, another powerful American team from top to bottom played at a high level and finished the first session with a 4-1 lead.

“I told the guys last night we need to set the tone — us and J.T. and Jordan’s match — and we did,” Schauffele said. “Playing this format on a day like today and not making any bogeys, it’s exactly what we need.”

Players like Cameron Smith and Joaquin Niemann departing the PGA Tour for Saudi-funded LIV Golf damaged the International side, which was already the underdog in these matches, more than the Americans.

Si Woo Kim and Cameron Davis were the only things preventing the International side from being eliminated. When they faced Masters champions Scottie Scheffler and Sam Burns, they were two holes down when they capitalised on American errors to eke out a two-up victory.

Taylor Pendrith and Mito Pereira, two of the eight rookies on the international team, came close to scoring another point. When Pereira played a wayward tee shot on the difficult par-4 final hole and Pendrith could only manage the right bunker, they both made bogey. They were level heading into that hole. Max Homa and Tony Finau won 1-up and earned a point.

Finau said, “We did what we were supposed to do.

The other American point was earned by Collin Morikawa and Cameron Young, the PGA Tour rookie of the year, who enjoyed the atmosphere in front of a packed house at Quail Hollow and added his own victory moment.

With six holes remaining, they were tied with 20-year-old Tom Kim and K.H. Lee in a close match. The outcomes of the previous three games were uncertain at the time. It was only one point, despite how simple Cantlay and Schauffele made it appear in the first game.

When Morikawa made a birdie putt on the downwind 14th hole, the Americans took back the lead. When Young slammed in a 25-foot birdie putt on the 17th to end the match, the lead was still 1 up and appeared to be heading toward the 18th.

“That moment there is about all I can ask for,” Young said. “Obviously, it’s the first day, but every point we get is important. And that’s a feeling I’ve been waiting to have for a long time.”

Cantlay and Schauffele met for the first time while travelling to Australia for the Presidents Cup in 2019, which was their respective first-team competition. Off the course, they have bonded quickly, and they are developing into a formidable team inside the ropes.

The two most seasoned players on the international team, Scott and Matsuyama, provided them with a lot of assistance, but they also missed numerous putts along the road that would have either won or tied a number of holes. The Americans claimed the lead and never looked back after Matsuyama missed a putt from four feet on the third hole.

Then built a 4-up lead by winning three holes in a row through the par-5 seventh, and they won the final three holes with pars.

Thomas had a wild day; he won the PGA Championship at Quail Hollow in 2017. On the fourth par-3 hole, he mishit a 9-iron so horribly that it landed 40 yards off the green. On the par-5 16th hole’s bunker shot, he shanked it. Both he and Spieth avoided losing holes.

When Spieth’s drive found the left side of a creek on the 15th hole—usually the 18th at Quail Hollow for stroke-play competitions—Thomas did well to reach the back of the green, and Spieth ran his downhill putt about 25 feet past the hole.

Im and Conners had a chance to win the hole (7 feet away for par) and tie the game. The Americans were two up and headed for another point when Thomas made the par putt and Conners missed.

“You win when you pick up your partner, and he did that,” Spieth said. “That switch we had on the 15th was unreal there. Looking at going to even and instead we leave that green 2 up. It was the difference in the match.”

Next up were five four-ball matches on Friday, and with each point earned in these lopsided matchups, the Americans are getting closer to winning nine consecutive. Since the Presidents Cup’s inception in 1994, they have never suffered a defeat at home.

The Americans only need 11 points from the final 25 games to win the cup after such a strong start.