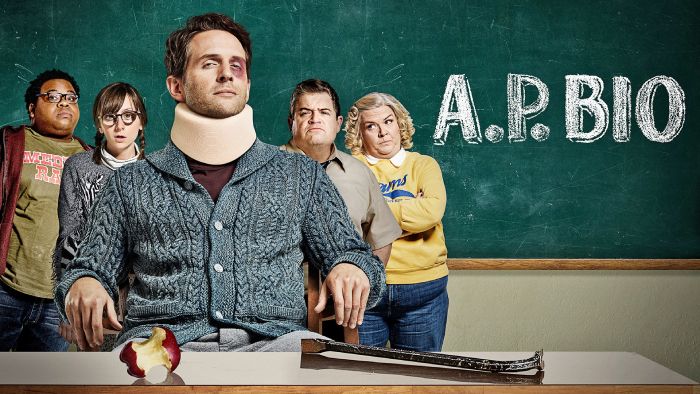 Mike O’Brien, the show’s creator, said on Monday that the Peacock series is over after four seasons and 42 episodes. A.P. Bio, about a former Harvard philosophy professor (Glenn Howerton) who now teaches high school biology, was Peacock’s first written comedy pickup; it was renewed for a third season after being cancelled by NBC after season two.

He wrote, “I’m sad to announce that AP Bio will not be renewed for a fifth season.” “But mostly I’m feeling grateful right now. To all the fans who watched the show and fought for it to come back after the cancellation! And to Peacock & UTV for giving us two more seasons after that! (all 42 eps are on peacock so check them out if you haven’t). This show has been one of the best experiences of my life and that’s because of the hundreds of hilarious, hard-working, positive people that were involved. I’m going to name a few below but can’t possibly cover everyone. So if you ever worked with us for even a day, THANK YOU!! And to you other shows, hire these people !”

“We were honoured to be able to give fans two more seasons of this beloved, quirky comedy. We’re grateful to creator Mike O’Brien for his out-of-the-box storytelling and for taking us on this journey with these characters at Whitlock High,” Peacock said in a statement.

The announcement comes three months after the fourth season of A.P. Bio premiered. Peacock, like other streaming services, does not provide comprehensive watching data on its programming, although streamers are known to consider the cost of a title versus its ability to attract and retain subscribers.

It’s Always Sunny In Philadelphia’s Howerton appeared in A.P. Bio as disgraced Harvard philosophy scholar Jack Griffin, who is forced to return to Toledo, Ohio, to work as a high school Advanced Placement biology teacher after losing his dream job. As he enters Whitlock High School, Jack makes it obvious that he will not be teaching any biology classes. When Jack learns he has a room full of honour roll students at his disposal, he decides to put them to good use.

O’Brien, a former cast member of Saturday Night Live, created the show and executive produces it alongside Seth Meyers, Mike Shoemaker, Lorne Michaels, and Andrew Singer. Michaels’ Broadway Video and Meyers and Shoemaker’s Sethmaker Shoemeyers Productions collaborate on the project, which is produced by Universal Television.

“AP Bio” isn’t the first Peacock comedy to be cancelled; in August, the revival of “Punky Brewster” was terminated after only one season. “Rutherford Falls,” “Girls5Eva,” and the “Saved by the Bell” sequel series are among Peacock’s current live-action comedy offerings.