Monday, 23 May 2022
You are here: Home A major UI update is coming to Android Auto 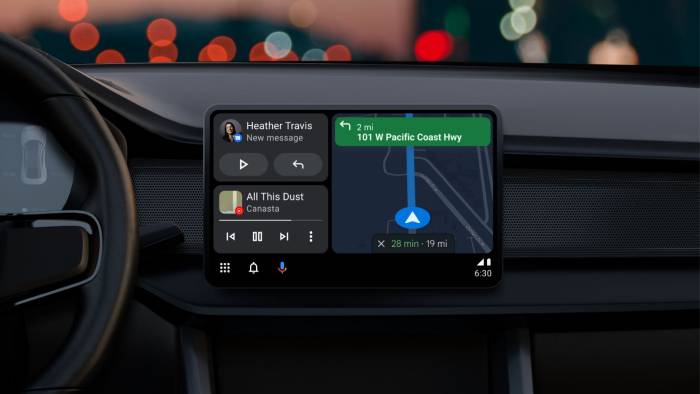 The most significant future improvement is a new UI for Android Auto, which will make it easier to explore, control media, and connect with others while driving, according to Google’s “What’s New with Android for Cars” session. To suit the larger displays in new automobiles, the business has made split screen view common across all devices, allowing you to see directions, music, and texts all at once. That means you won’t have to go through a number of menus and settings to pause a song or see a new message.

Furthermore, Google is enhancing support for flexible layouts, which can better adapt to the growing diversity of displays in new cars. Whether you have a sweeping extra-wide display on your dash or a towering portrait-oriented panel, the Android Auto UI can display all of your important information. Meanwhile, the Google Assistant is improving contextual suggestions for things like answering missed calls, texting arrival times, and more to improve hands-free controls.

Finally, Google is boosting your in-car entertainment options with expanded support for video streaming apps for owners of cars with Android Automotive systems (such as new Ford, Volvo, and other vehicles). Google announced the ability to broadcast YouTube clips earlier this year at CES, and the Tubi TV and Epix Now applications will be added soon.

Remember that you can only watch videos while your car is parked; don’t try to stream while driving. In the future, the business says it wants to allow passengers stream video from their phones to the vehicle’s built-in display, though no specific date has been set for when this would be available.